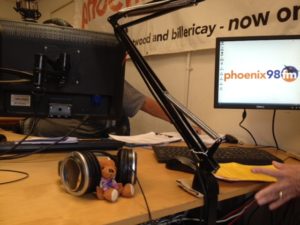 It’s been a hectic month.
I’ve been to the memorial of the beginning of the Battle of the Somme in Thiepval, France and then a few days later, I went to Pompeii to see the great David Gilmour from Pink Floyd in concert in the amphitheatre. Shortly after I got back from Italy, I went to a memorial cricket match in Wickford, and far from being as interesting as paint drying, it was quite exciting. Our team won too. Anyway, it’s been a month of firsts and today was no exception. It was the first time I’ve ever been featured on the radio.

Of course, I didn’t go alone. I took the Old Girl with me and I have to say, she rather hogged the whole thing but it was probably just as well because when you get trapped in a set of headphones, (see photo above) it’s not easy to speak with much confidence and to be honest, I couldn’t have answered many of the questions anyway. But I did get a mention. In fact, I got several. I also finally escaped from those headphones.

Sylvia Kent and Scott Ross were brilliant and if you’re interested, you can hear the whole thing here on the Phoenix 98FM radio website. 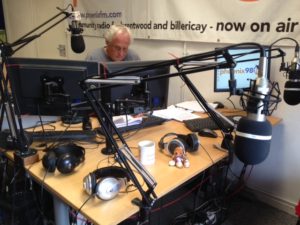 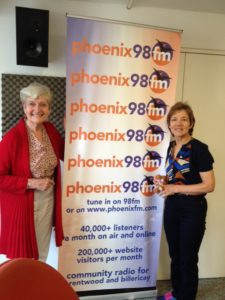 On the left is Scott Ross in action in the studio and on the right is my new friend Sylvia Kent and me. If you can’t see me, I’m sitting in the Old Girl’s hand. It’s a shame I’m so small but at least I have a face for radio. Or so I’ve been told. It’s just a pity you can’t see it.

Anyway, if you can’t be bothered to click on the link to the Phoenix 98FM website above and listen to the whole thing, I’ll summarise. The spot on Scott Ross’s radio show was the Book Club with Sylvia Kent and the Old Girl talked about her writing. And that’s pretty much it.

If you’re interested, she now has two books published and they are both completely different. Firstly, there’s DAFFODIL AND THE THIN PLACE. You can get it as an ebook from the Muse it Up Publishing site here and it’s available from other ebook retailers. You can also get it in paperback format from Amazon, here. And apparently, there’s a sequel in the pipeline too.

Or, there’s THE GREAT WAR – 100 STORIES OF 100 WORDS HONOURING THOSE WHO LIVED AND DIED 100 YEARS AGO. Yes, I know it’s a bit of a mouthful. You can get it as a paperback and ebook here. Make sure you have a box of tissues handy. I promise you, there will be tears.