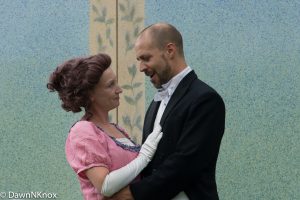 A Woman of No Importance by Oscar Wilde

A Woman of No Importance by Oscar Wilde

Each year, DOT Productions tour fabulous venues – some indoors and some outdoors in Essex, London and the south east of England, with a play. This year, they are performing ‘A Woman of No Importance’ by Oscar Wilde and I was lucky enough to be able to see the outdoor performance on Rayleigh Mount on Sunday 19 August. I have managed to see the last three DOT Productions’ summer tours which were Jane Austen’s ‘Emma’ and ‘Northanger Abbey’ and Oscar Wilde’s ‘The Importance of Being Earnest’ all of which were thoroughly enjoyable.

I must admit, I didn’t know much about ‘A Woman of No Importance’ before I saw it. Here is the information given in the programme:

A New and Original Play of Modern Life

After Wilde’s success with ‘Lady Windermere’s Fan’, Herbert Beerbohm Tree, actor manager of London’s Haymarket Theatre, asked Wilde to write a play for him. Rehearsals started in March 1893 and Tree enjoyed the part of Lord Illingworth so much that he continued to play it outside the rehearsal room.

The play opened on 19 April 1893 and the first performance was a great success. 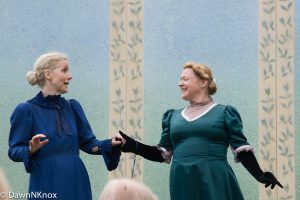 The cast of DOT Productions are as follows: Francesca Anderson, Andrew Lindfield, Elliot Munro, Charlotte McGrory, Dawn Bush and Non Vaughan-Thomas. The producer is Louisa Marie Hunt and the director is Micha Mirto.

If you are in or around Essex and the south east of England during the rest of August and the beginning of September, there are about a dozen more performances and you can find more information about DOT Productions  here 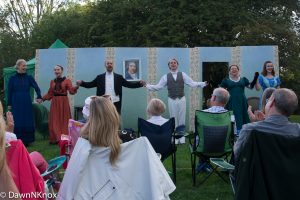 Later in the year – on Saturday 10th November 2018, DOT Productions will be performing ‘The Other Side of Peace’ in Basildon for the Forget Never Project – Sacrifice and Legacy.