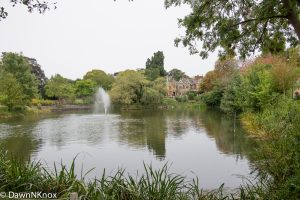 Bletchley Park – Mansion across the lake

Bletchley Park is the home of the men and women who broke the codes generated by the Enigma Machine during World War Two and was also the birthplace of the modern computer. The codebreakers’ work is believed to have shortened the duration of the war, thus saving countless lives which would otherwise have been lost. Today, the former top secret location in the middle of the Buckinghamshire countryside is open to the public and is well worth a visit.

The late Victorian mansion was once the hub of a large estate and over the years, the building has been altered and enlarged several times. Stables, cottages and other estate buildings still survive, and nearby, there are also approximately twenty utilitarian wartime timber huts and brick and concrete blocks built for use by the Government Code and Cypher School (GC&CS) during World War Two.  Codebreaking at Bletchley Park first took place in September 1938 when a small group of people moved into the mansion under the pretext of attending a shooting party. The ‘guests’ were in fact members of MI6 and GC&CS, a secret team who included scholars and academics, recruited to break codes. The group’s job was to set up and run intelligence activity from Bletchley Park. No time was wasted and they transmitted their first message at 6 pm on the day they arrived – 18 September 1938. 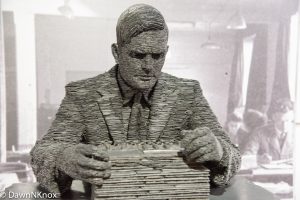 Initially, there was a staff of around 150 people but as more arrived, the various sections began to move into large prefabricated wooden huts set up on the lawns of the park. The first operational break into Enigma came around 23 January 1940, when the team working under  Dilwyn ‘Dilly’ Knox, with the mathematicians John Jeffreys, Peter Twinn and Alan Turing, unravelled the German Army administrative key that became known at Bletchley Park as ‘The Green’. Encouraged by this success, the Codebreakers managed to crack the ‘Red’ key used by the Luftwaffe. In addition to German codes, Italian and later Japanese systems were also broken.
Although I was familiar with the story of Alan Turing, I didn’t recognise the other names and I was particularly intrigued by Dilly Knox, wondering if he was a distant relative of my husband! 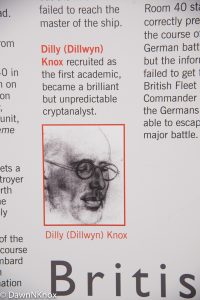 On the orders of Prime Minister, Winston Churchill, Bletchley Park received ever increasing numbers of staff and resources. Eventually about 10,000 people worked in the park. Brick and concrete blocks were built for the new staff members and for the growing number of ‘Bombe’ machines which were used to find the Enigma ‘keys’. The Bombes were operated by Wrens (Women’s Royal Naval Service), many of whom lived in requisitioned country houses such as Woburn Abbey. Work continued around the clock with three shifts operating during 24 hours, the first beginning at midnight. Each person carried out their own particular task and then passed on their work to the next person in the chain. In that way, people did not have an overview of the work that was done – simply a knowledge of their own particular part. The relentless work was relieved by dances, tennis, concerts and other social activities in the Park which allowed people time to mentally switch off and relax. 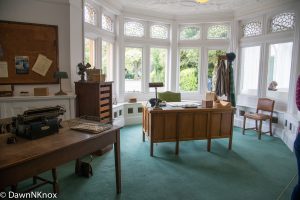 Office of Alastair Denniston, Head of the Government Code and Cypher School

New recruits would be taken to the office of Commander Alastair Denniston, the head of the GC&CS,  on arrival at Bletchley Park, after having their papers vetted by the security guards at the entrance. Before being accepted by Commander Denniston on to the staff, each person would have to sign the Official Secrets Act which swore them to secrecy about their work for their entire life – not just the duration of the war. Apparently many people went to their graves never having divulged the work they had carried out at Bletchley. 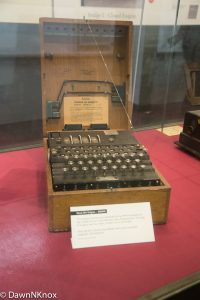 Here is an example of an Enigma Machine on display. It has a lamp board above the keys with a lamp for each letter. The operator pressed the key for the plaintext letter of the message and the enciphered letter lit up on the lamp board. The enciphered letters were noted and this was the message which was transmitted. The machines contained a series of interchangeable rotors, which rotated every time a key was pressed to keep the cipher changing continuously. This was combined with a plug board on the front of the machine where pairs of letters were transposed, these two systems combined, offered 159 million, million, million possible settings to choose from, which the Germans believed made Enigma unbreakable. 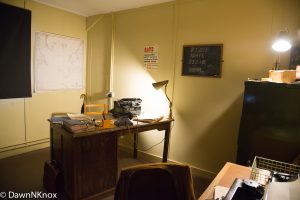 Office in one of the many huts

At first, GC&CS followed its pre-war recruitment policy and looked for ‘Men and women of a professor type’ through contacts at Oxford and Cambridge universities. Many famous Codebreakers including Alan Turing, Gordon Welchman and Bill Tutte were found this way. Others such as Dilly Knox and Nigel de Grey had started their codebreaking careers in World War One.

As the codebreaking process became more mechanised, and the volume of intercepts grew, many more staff were recruited from a wider range of sources. A significant proportion of these were taken from the Women’s Services; the WRNS, the ATS and the WAAF. By 1945, women made up 75% of the staff of Bletchley Park and of these, six out of ten were in uniform. The remainder were recruited through the Civil Service although interestingly, those who had correctly completed the Telegraph crossword of 13 January, 1942 (a test set up for recruitment purposes), were also signed up.

It’s definitely well worth a visit!