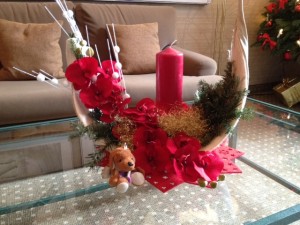 I’m not really interested in shopping.
I can take it or leave it – and preferably, I leave it during Christmas. Shoppers aren’t usually concentrating on what’s at ground level and that usually results in squashed paws for me.
But, the Old Boy, Old Girl and her mum took me to several Christmas Markets and I have to say, they were rather spectacular.

The first one was in Ghent, Belgium where we stayed in a 16th century merchant’s house which is now a hotel. 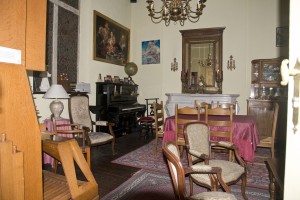 Room in the hotel 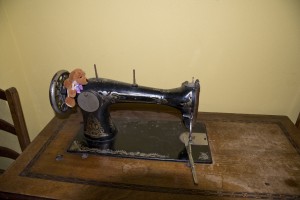 Here, you can see me test driving an old sewing machine that was outside my bedroom. I don’t know why there was a knife under the needle. Perhaps it needed a hem?
Anyway, Ghent was very picturesque and the market was interesting. You can get all sorts of Christmas gifts on the stalls, from tools made of chocolate, to mulled wine, from Santa hats, to Tupperware.
I’m not sure what Tupperware is but the Old Girl and her mum thought it was rather amusing. Anyway, if you want some Christmas Tupperware, try the Ghent Christmas Market, next year. Here are a few photos I took with the help of the Old Girl, of our stay in Ghent. 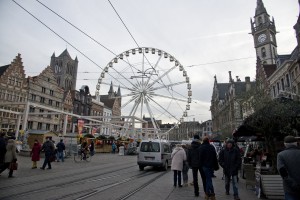 Ferris wheel in the market

Probably the only downside to Ghent was that there were roadworks, about which Janet (our satnav) was totally ignorant. On the morning we left, she kept insisting we turned right up a road that was being dug up and when the Old Boy tried to find another way, she directed us back to the same road. She acquired a few new names that day – and none of them were ‘Janet’. I don’t know how she unerringly took us to the hotel on our arrival but couldn’t get us out of Ghent when we wanted to leave. Round and round we went until we thought we were trapped for good. But we finally escaped and lived to tell the tale. Our next stop was Essen, Germany.
But more of that another day.

Just a thought. If you haven’t yet bought your loved ones their Christmas Tupperware, don’t worry. I have the perfect gift idea for you. It’s the Old Girl’s book ‘Daffodil and the Thin Place’. You can get it in ebook format here on the Muse It Up Publishing website as an ebook or as a paperback here. It’s up to you. Easy peasy Christmas shopping.