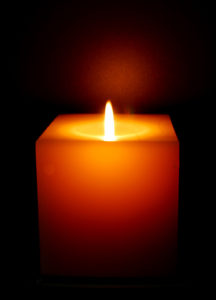 I had to think twice when I first saw the statement ‘There is no such thing as darkness.’ But once I’d thought about it, I realised that there isn’t. You can’t make darkness and you can’t measure it, other than in terms of the absence of light.

I can only remember being in complete darkness twice. Once was in a children’s museum, when I crawled through a totally black maze of tunnels. Once inside, you had to crawl on all fours and keep one hand on the side of the tunnel so you knew which direction to go. I remember being amazed that it wasn’t possible to see a single thing, not even the hand in front of my face. There was a hatch in the roof of the tunnel in case anyone panicked and needed to be rescued. I managed to crawl through the tunnel from one end to the other without panicking but I found it strangely claustrophobic inside.

The second time I found myself completely in the dark was also in a tunnel but this time, I didn’t know it was going to be dark. It was one of the tunnels under the Royal London Hospital which ran from the main hospital to the Institute of Pathology which was behind the hospital and across the road. There were a few locked rooms leading off the tunnel but other than that, the tunnel was just one long passage. My colleagues and I often used the tunnel to move between the main hospital building and the labs in the Institute of Pathology and one evening, a friend and I were on our way home at the end of the day when there was a power cut. We were plunged into complete darkness and could see absolutely nothing. By maintaining contact with the wall, we were able to find out way out and escape.

If you’ve never experienced total darkness, it’s very hard to imagine the complete absence of light, nor how strange it is to be covered in a blanket of… well… nothing.

But isn’t it reassuring that even the tiniest of sparks of light overcome darkness and that darkness can never put out light.

In my ebook ‘Daffodil and the Thin Place’ the heroine, Daffodil travels back in time from the current day to the Victorian times and at night, she is frightened because it is so dark compared to what she’s used to. With the electric lighting and street lights of the twenty-first century, Daffodil is used a world of light but despite her fear, she leaves the relative safety of the church, to go out into the night to look for the Grey Monk. Does she find him? Well, you can find out in ‘Daffodil and the Thin Place’ which you can buy here on the Muse It Up Publishing website or from your favourite ebook retailer. All profits from sales of the book go to St. Nicholas Church, Laindon with Dunton, Essex where the story takes place.