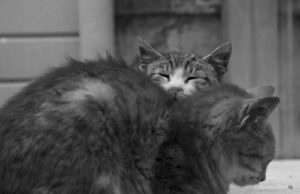 Telling the Future with Cats

How easy it is to get distracted, when you’re writing! I’ve just started writing a story in which one of the characters tries to look into the future by reading the tea leaves in her cup. It seemed a good idea to look up what divination by tea leaves entailed but I must admit, I got a bit sidetracked. Well, I had no idea that fortunes could be told using laughter, or cats, and so I had to investigate!

I’d been looking on the livescience website, and found the term Gelomancy, which is described as “carefully listening to hysterical laughter (and even animal noises) for clues about the future.”
Intrigued, I searched for more detials on Gelomancy but I couldn’t find any other reference at all. How disappointing. If you know more about it, please let me know.

The livescience website also describes Felidomancy which is divination of the future, by observing cats and apparently, there is more information available on this method. I wasn’t completely surprised that cats are used to tell the future, after all, many of us are familiar with the superstition that a black cat crossing one’s path is lucky. I didn’t, however, know that when a cat sneezes, it is predicting rain. I imagine this method of weather forecast is very accurate because when a cat sneezes, it’s always going to be raining somewhere in the world…

Anyway, during my online search of Felidomancy, I discovered a page in Wikipedia about -mancy which is the suffix for specified forms of divination. And what amazed me was how many types of divination could actually be specified! I was too busy to click on each of them to find a definition, so some of them may have been alternate terms for the same type of fortune-telling – but there were ninety ‘specified forms’ on that page! Despite the need to get back to my writing, I did click on Gyromancy which apparently means divination “where people walk on a circle of letters until dizzy; the letters they fall on are significant.” or alternatively, divination “by whirling a coin on a circle of letters.” The reason I clicked on Gyromancy, was because it was where Gelomancy would have been in the alphabetical list, had it been included. And I also discovered that the technical name for divination by tea leaves and coffee grounds is Tasseomancy.

To be honest, none of that helped me with my story, so I’m going to stop now and go back to writing. I am, really!