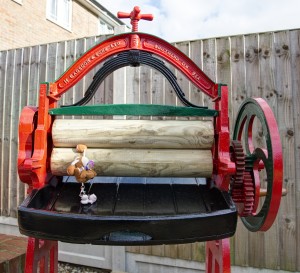 Somebody once said that you should write about what you know. Well, that’s my writing career down the tubes.

The story I’m currently working on is about a devastatingly dashing dog detective, called Rog. When I say dog detective, I don’t mean a detective who detects dogs – that would be rather foolish because most dogs are quite obvious, although I did once see some dogs disguised as small humans. But I think you’ll agree, it didn’t require enormous powers of detection to determine that they are actually dogs. 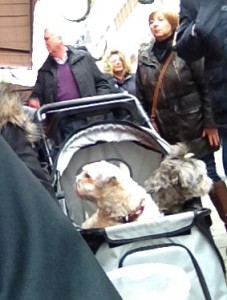 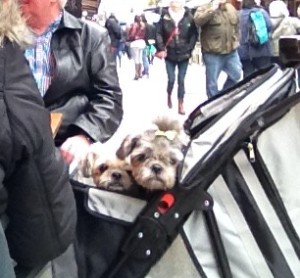 Anyway, back to my story. Rog is a is a very handsome dog (much like me), who is also a detective – hence a dog detective.

So far, so good. But I’m having problems thinking up an interesting crime for him to solve. The other day, I thought I had an idea. We visited the Old Girl’s cousin who had renovated an antique mangle and I wondered how easy it was to commit a mangle-related crime. I thought the best way to find out is to get up close and personal with the mangle and you can see the result in the top photo. I got mangled.

Well, at least now, I don’t have the problem of writing the story because my paws will take a while to get back into normal dog shape after the mangling.

The Old Girl told me not to worry and said that it might help to know what you’re writing about but the imagination can take you a long way, especially when no one can prove whether you’re right or wrong. She said sci-fi stories are often full of all sorts of weird and wonderful aliens that have probably all been made up. You’ll note I said probably, because, no one can prove it one way or the other. Perhaps I should have said hopefully.

Anyway, when my paws are three dimensional again, I thought perhaps I’d write a sci-fi story – starring Rog, of course. I’ve done a bit of preliminary research but it sounds very complicated – with lots of time and space and  stuff like that. It made me wonder how time and space stick together and don’t just fly apart. The Old Girl suggested it might have something to do with gravity but I could tell she didn’t know what she was talking about. Perhaps somewhere out there in deepest space, there’s a gizmo like a cosmic mangle that time and space get fed through and come out fused together. Yes, that must be it.

Well, it will be some time before I can type again, so I’ve got a while to work on my time, space, cosmic mangle theory. 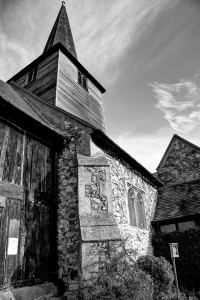 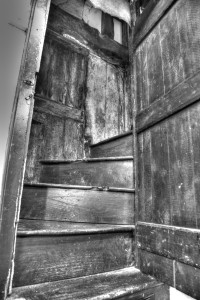 Stairs inside the school house

In the meantime, here’s a photo of St. Nicholas Church, Laindon with Dunton, where the Old Girl’s story, DAFFODIL AND THE THIN PLACE, is set. And the second photo shows the strange set of stairs which lead up to the top of the school house. You can get DAFFODIL AND THE THIN PLACE as an ebook from the Muse it Up Publishing site here and it’s available from other ebook retailers. You can also get it in paperback format from Amazon, here. And all profits go to the restoration of the church.