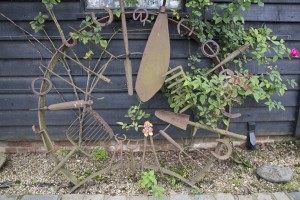 As a multi-talented dog who has paws in lots of pies, you may be surprised to know I’m no art critic. But that’s not going to stop me. In my canine opinion, John Constable’s painting The Hay Wain has something missing. But I’ll talk more about that later. Firstly, I’m going to tell you about my day out. On Friday, I took the Old Girl and her mum, the Old Boy and the Old Girl’s cousins to Constable Country, on the Suffolk and Essex border. 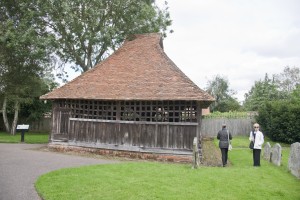 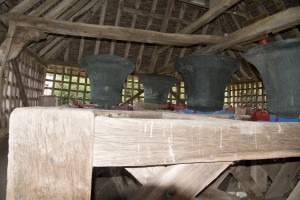 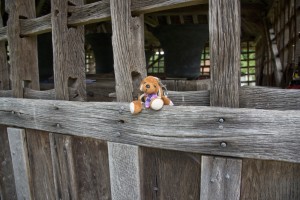 Reg with bells in the background inside the bell-cage

We started in East Bergholt where there is a church which has bells. Nothing strange about that I hear you mutter (I have good hearing; I’m a dog). Anyway, St. Mary’s Church has bells in a cage. No, they aren’t savage. They didn’t move the whole time we were there but they are upside down and at ground level. And apparently, that’s how they’re rung today – upside down. Originally, Cardinal Wolsey promised to assist in the building of the bell tower which was started in 1525 but when he died in 1530, the work stopped. The cage was built in 1531 and the bells have been on the ground since then. I said to the Old Girl that I couldn’t see how Cardinal Wolsey’s death could have stopped the bell tower being built – I’m sure they could have got another builder in. But she just laughed a lot. Funny woman. 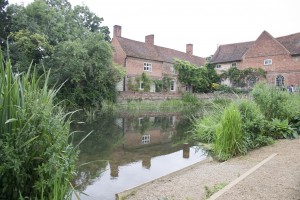 Flatford Mill across the pond 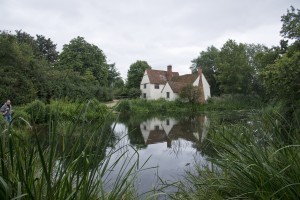 Willie Lott’s house from the mill 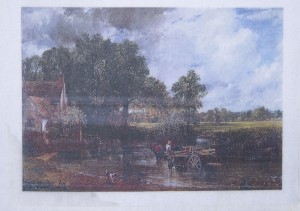 Photo of The Hay Wain

Anyway, we then walked to Flatford Mill where John Constable used to work, play and generally roam about with his painting set. It was very pretty with swans on the River Stour and lovely old buildings. The Hay Wain shows Willie Lott’s house and the mill pond (and the hay wain, of course). In order to recreate the composition, there were instructions telling you where to stand and a photo of the actual painting for comparison. Of course, things have changed since Constable’s day. The chap and his hay wain are no longer there of course, so we couldn’t recreate the scene exactly but the Old Girl did her lamentable best. Unfortunately, there were no painters around to capture my likeness so I had to make do with the Old Girl and her camera. Check out the result above of a modern version of Constable’s The Hay Wain without the hay wain and with me, to add a bit of interest. I really think Constable should have included a dog such as myself, in the original. It would have improved the painting enormously. 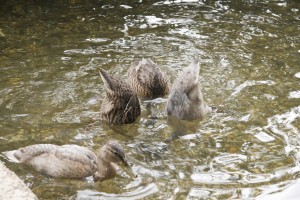 We had lunch in Dedham where we saw another mill and mill pond. After the excitement of the upside down bells, we discovered some upside down ducks. Yes, really. I’ve never seen so many ducks’ bottoms.

Just in case you haven’t been around for a while and you haven’t got your copy of the Old Girl’s book ‘Daffodil and the Thin Place’, you ought to get your ebook copy here from the Muse it Up Publishing site or your paperback copy here. Why? Well, because all profits are going towards the upkeep of a different bell tower – the one on St. Nicholas Church, Laindon with Dunton. The bells are still up high, where you’d expect them to be, but the woodpeckers are attacking the wooden bell tower and it needs lots of repair work. Since Cardinal Wolsey isn’t available, you could help by buying ‘Daffodil and the Thin Place’.