Sometimes, the Old Girl can be rather smug. And I’d say that this week, she was about as smug as it’s possible to be without exploding. Last year a Dutch gardening magazine contacted her via Flickr, where she puts lots of her photos, and asked if they could use one of them. They said they’d send her the February edition of Groei&Bloei, containing her photo taken in Warley Place, and it arrived last week.
And she was smug, smug, smug.
Once I’ve learned to read, I’m going to open my own Flickr account. I bet people will be queuing up to use my photos. I can be smug too, you know.

Anyway, just by chance, the Old ‘Uns had arranged a trip to Warley Place with their cousins and we revisited where the Old Girl had taken her photo. 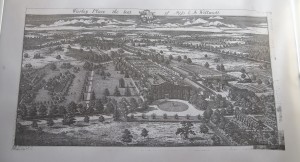 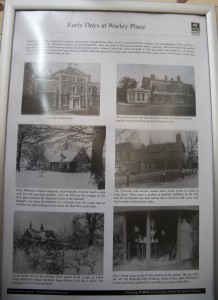 Photos of Miss Willmott and her house at Warley Place

This is an aerial drawing of what Warley Place looked like when Ellen Willmott, the final owner lived there. She died in 1934 and the house was demolished a few years later, so this must have been drawn before then. I can’t imagine where the artist sat to draw that. Anyway, there were also photos of what it looked like and you can see them in the next photo. It all looked very grand, so it’s a shame that now there are only ruins. But it’s not all bad news because the grounds are looked after by the Essex Wildlife Trust and the 16 acres are now full of all sorts of plants and animals. I was a bit upset that you’re not allowed to take dogs into the grounds and I thought I’d have to stay in the car but the Old Girl hid me in her pocket so no one could see I was there. 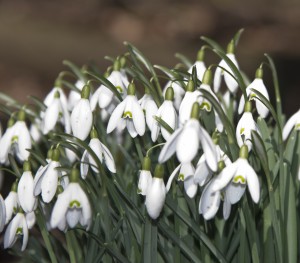 The snowdrops were out which was rather nice and the daffodils are on their way, so I expect we’ll go back to see them when they’re in bloom. The Old Girl, as you probably know, is mad about daffodils. 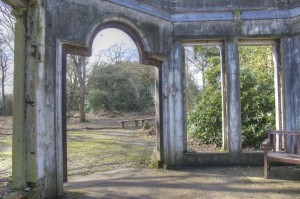 Ellen Willmott’s father bought the house and estate and when he died, he left it to her. She spent lots of money travelling the world and bringing back lots of plant samples for her gardeners to put in the garden. By the time she died, she was penniless and after her death the beautifully kept gardens were left to go wild.

The conservatory was my favourite part, although it’s now a bit chilly with no windows or roof. But I think the Old Girl’s favourite place is here by the boating lake. You’ve probably spotted it’s not full of water and is quite overgrown so it’s a bit useless for boating. But once it was full of water and Miss Willmott’s nieces and nephews used to row about in the lake when they came to stay. 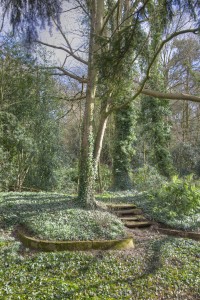 Anyway, if you aren’t aware that the Old Girl likes daffodils, you obviously haven’t heard of her ebook ‘Daffodil and the Thin Place’. I know it’s hard to believe that someone doesn’t know about ‘Daffodil and the Thin Place’ but rumour has it there are a few. So, if you’re one of them, click here to go to the Muse It Up Publishing website or go to your favourite ebook retailer.