The Old Girl has been watching a series of video programmes about the British monarchy by Dr. David Starkey. I’ve been watching them too and I must admit, I’ve become hooked on British royal history. So far, we’re up to King Henry VIII, who as most people know, was a larger than life character and seemed to have quite a way with the ladies. I can’t imagine why anyone would seek a place at court and risk being around someone who condemned so many people to death. And I wonder why on earth anyone would agree to marry him. But perhaps he was very persuasive.

Anyway, the Old Girl was particularly interested in who was on the English throne at the time when St. Nicholas Church, Laindon with Dunton was built. It’s quite hard to say because no one knows the exact date that it was built but it is thought to have been some time in the the thirteenth century although it’s quite likely that a wooden Anglo-Saxon building stood there before the current stone building. So, we checked the dates and if it was built in 1200s, the following kings could have been on the throne:

The Old Girl said that King John would have had to have got his skates on because he only reigned for sixteen years of the thirteenth century and it was likely he had quite a lot on his mind with Magna Carta and the barons who he’d upset. Poor King John must have had quite a shock when he realised he had to sign a document to say he could no longer do exactly as he pleased and that he had to start playing fair. I was a bit confused until the Old Girl explained, because for some reason, I thought Magna Carta was a type of ice cream. 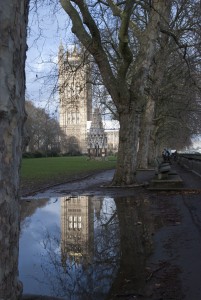 Anyway, John’s son, Henry, became king in 1216 and he was probably on the throne when St. Nicholas Church was built because he ruled for the next 56 years. That would have been plenty of time to construct something. Henry came to the throne as a nine-year old boy which must have been a bit daunting and he obviously hadn’t taken much notice of the trouble his dad had with Magna Carta because he tried to wriggle out of it and got into a bit of hot water. He also upset people, but one good thing he did was to rebuild Westminster Abbey, starting in 1245, so the Old Girl likes to think that it might have been an age of building churches and it might have been during Henry III’s reign that St. Nicholas Church was built.

Of course, she might be wrong because Henry’s son, Edward I, also known as ‘Longshanks’ was king for 28 years of the thirteenth century (and seven years of the fourteenth century) and that was plenty of time to build a church… I think… actually, I’ve no idea how long it takes to build a church but it seems like a long time to me. I have been quite interested to see that there seems to be a theme running through royal history of that time – kings seemed to annoy people. And Edward I was no exception. Unfortunately, he upset the Welsh and the Scots. Not very wise. And not very nice, either.

So, we’re still not sure who was on the throne when St. Nicholas Church was first built, but we do know that it’s in need of a lot of renovation. The Old Girl’s ebook, ‘Daffodil and the Thin Place’ is on sale from the Muse It Up Publishing website here as well as from your favourite ebook retailer and all profits from sales will go towards the upkeep of the ancient St. Nicholas Church. The story takes place in the church in the present day and the Victorian times. Now, who was on the throne in the Victorian times? Why is the Old Girl laughing?