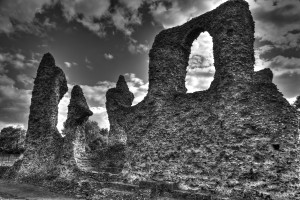 Fancy asking a dog if he wants to go to Bury St. Edmunds. The obvious question is why should I want to bury St. Edmunds and who is he anyway? I know dogs have a reputation for burying things, but other than the odd bone, I’ve never buried a person, especially not a saint. The Old Girl soon put me right and told me it’s a town in Suffolk. Boring, I thought – until she told me we were going on a wolf hunt. I told her I was washing my hair on whichever day she was going. Well, how was I to know we don’t have wild wolves in England? I am, after all, only a dog.

But the Old Boy, the Old Girl, her mum and cousins persuaded me to go, and a good day was had by all. So, why were we on the trail of wolves? Apparently, 26 wolves created by local artists have been put all over Bury St Edmunds, and tourists, such as us, search for them. But why wolves? Well, it goes back to the year 869AD when Edmund, King of East Anglia, was captured by the Danes who shot and decapitated him when he refused to give up his Christian faith. The King’s men found his body but his head was missing. They discovered a wolf protecting the king’s head and when the men placed it on the body, the head fused back. St. Edmund was the patron saint of England from 869 until 1350, when presumably he was ousted by St. George. I felt quite sorry for King Edmund.

Anyway, we found a variety of wolves, all made of different materials – from topiary, to recycled plastic bottles. Here are a few of the wolves we found: 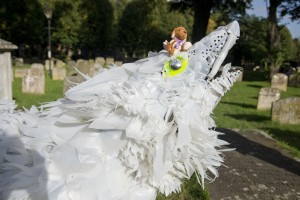 Reg on the plastic bottle wolf 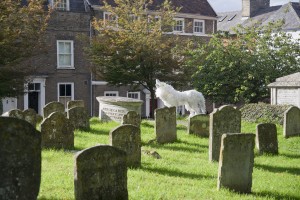 The plastic bottle wolf in the graveyard 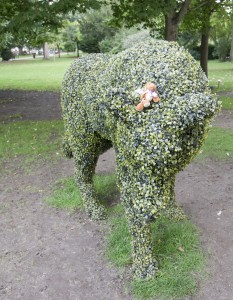 Reg on a topiary wolf 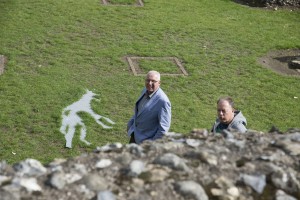 We spent quite a lot of time in the abbey grounds, especially the Appleby Rose Garden where there was a very unusual bench. To be honest, it didn’t look very comfortable, so I tried it out and then I discovered why it was such an odd shape – it is made from the wing of a USAAF B17 Flying Fortress bomber aircraft and is there in recognition of the many American serviceman based in Suffolk. 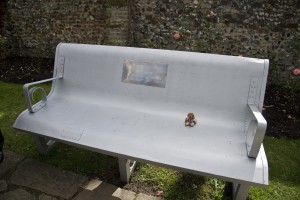 Reg on the bench made out of a US aircraft wing 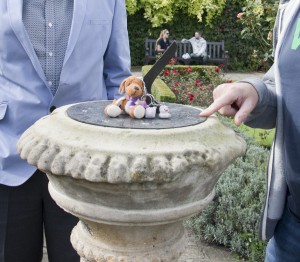 Reg on the sundial

I had a bit of difficulty with the sundial though. The Old Boy said that was because I kept getting in the way of the shadow. Personally, I think its batteries had run out but what would I know?

It was an exciting day, in the end, even if it didn’t involve burying anyone or dodging wolves.
I may even have to write a story about it. The hero will be a handsome dog, called Rog. He’ll look quite a lot like me. And the story will take place in King Edmund’s time. Rog will persuade the wolf and his friends to finish off the Danes before they find King Edmund. Then Rog will become the king’s favourite etc. etc. etc. I’m not sure how Rog will break the news to St. George that St. Edmund won’t be resigning as patron saint of England but leave that particular plot wrinkle with me, I’ll think of something.

It’ll take me a while to get all my ideas down on paper, so in the meantime, why not buy a copy of the Old Girl’s ebook ‘DAFFODIL AND THE THIN PLACE’, which is available from Muse it Up Publishing here and from all major ebook suppliers. It’s also now available in paperback and you can buy your copy here.
It doesn’t contain any wolves or kings but there is a one-eyed dog called Nelson.