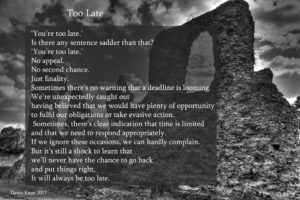 Is there anything sadder than hearing that? Perhaps… but it must rate highly for sadness.

Is there any sentence sadder than that?

Sometimes there’s no warning that a deadline is looming. We’re unexpectedly caught out having believed that we would have plenty of opportunity to fulfil our obligations or take evasive action.

Sometimes, there’s clear indication that time is limited and that we need to respond appropriately. If we ignore these occasions, we can hardly complain.

But it’s still a shock to learn that we’ll never have the chance to go back and put things right.

It will always be too late.