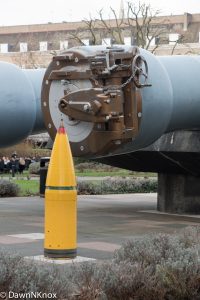 Outside the Imperial War Museum – 15 inch guns and shell

A Jaunt to the Imperial War Museum, London

Carrying on with my research into World War Two,( see A Jaunt to Biggin Hill,)    for a romantic story I’m writing which is set during that period, my cousin, Dave, and I set off to London to visit the Imperial War Museum in Elephant and Castle, (click here for the IWM website).

Dave and I are never certain if we’ll end up at our destination when we go to London because we’re very easily sidetracked! Within minutes of leaving Fenchurch Street Station, we’d discovered St Olave’s Church, on the corner of Hart Street and Seething Lane and as we’d never visited it before, we thought we’d take a quick look inside. A notice on the wall listed points of interest, the first being a Crypt Chapel and Well 1182AD which sounded very interesting although there was no information about the entrance and after examining the Grinling Gibbons pulpit, the diarist, Samuel Pepys’ memorials and various stained glass windows, we decided the crypt wasn’t open to the public. And then just as we were leaving, we spotted a gate in a corner of the church. Stone steps led down to a small room containing artefacts and from there, a narrow passage led to more steps going down into the chapel. 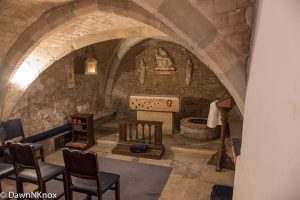 At the front, next to the altar was the well. There was quite a spooky atmosphere down there and when we heard the gate rattle, we thought we’d better investigate, imagining we might be locked in and forgotten! But it was two more visitors who received a shock when Dave and I appeared like magic, out of the chapel!

One more slight detour took us past the Monument, to St Magnus the Martyr Church, outside which is a piece of wood that was once part of the Roman London Bridge. Inside the church, is a model of London Bridge, circa 1400 with houses built on either side and street running through the middle. 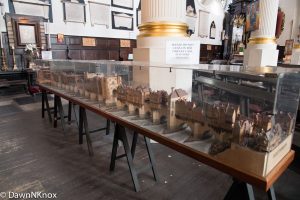 Model of London Bridge circa 1400

We also noticed a sign which said the following:

AD 1640 Mrs Susanna Chambers by her last will and testament bearing date 28th December 1640, gave the sum of twenty-two shillings and sixpence, “Yearly” for a sermon to be preached on the 12th day of February in every year, within the Church of Saint Magnus, in commemoration of God’s merciful preservation of the said church of Saint Magnus from ruin by the late and terrible fire on London Bridge. Likewise annually, to the poor, the sum of 17/6

By chance, it happened to be February 12th on the day Dave and I visited but there didn’t seem to be anyone there ready for Mrs Susanna Chambers’ sermon. Or perhaps her money had run out.

Dave and I decided that if we were going to get to the Imperial War Museum at all, that day, we’d better stop wandering around churches and get on the train, so shortly after, we finally arrived in the Elephant and Castle.

The book I’m currently working on takes place during the evacuation of Dunkirk, so I was very interested to see the smallest surviving ‘Little Ship’ which helped rescue the British Army from Dunkirk in May and June 1940. The Tamzine is a 4.6 metre (15 foot) long fishing boat which was built in 1937 and used for weekend fishing near Margate. 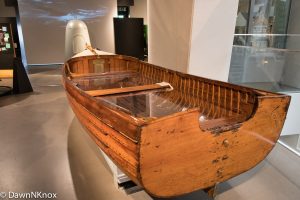 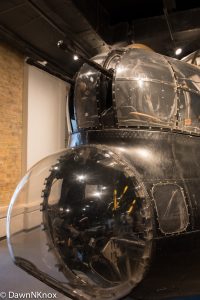 The Lancaster Bomber entered service in 1942 and the one on display in the museum, served with 467 Squadron RAF. it flew 49 operations between November 1943 and March 1944, each one recorded by a new roundel on the fuselage. It was known by its aircrew as Fred the Fox.

One of the most memorable exhibits for me, was the trunk in the following photograph: 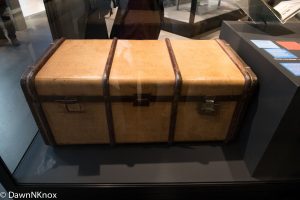 Considering the vast array of items in the museum, that’s probably a strange choice but the information next to the trunk stayed with me:

Lost Property
Jewish couple, Leonhard and Clara Wöhl, sent their belongings out of Germany in this trunk during the summer of 1939. The outbreak of war meant that they could not follow it. They died in Auschwitz.

There were too many exhibits to mention here but to see other photos of what Dave and I saw on our jaunt, click here

The next jaunt for research purposes, is likely to be Leigh-on-Sea in Essex…