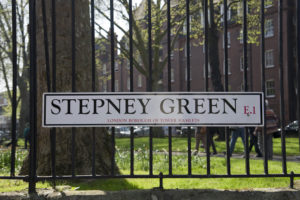 Stepney, E1, London, is probably not the first place in London that springs to mind for a guided tour. In fact when some young lads passed our group, one of them said in astonishment “Blimey, they’re tourists!”

Much of my working life was spent in this area, since I worked at both Mile End Hospital and the Royal London Hospital. I also have family links with the area but I’ve never known much about Stepney’s history. Since I’m writing a book at the moment which is set in Stepney at the start of the Second World War, I thought I’d take a trip to the area so that I could get the scenery firmly in my imagination. It was fortunate that Joe Studman from Jay Walks had a walking trip round Stepney on Saturday 08 April 2017.

It was interesting to see how buildings had changed since I worked in London. The large Charrington’s brewery is now a retail park and the public baths where I remember swimming during my lunch hour, is a resource for people with HIV. Turning off the busy Mile End Road, we found ourselves in Stepney Green with four small parks flanked by houses on one side, including one where Dr. Barnardo once lived and where the Scouts HQ was located (not, obviously, at the same time!) and St. Dunstan’s Houses on the other side, built in 1899 by the East End Dwelling Company. Further along was the Stepney Jewish School, from 1906. Going even further back in time – to 1381 – Stepney Green was famous as the place where the peasants from Brentwood, Essex congregated during the Peasants’ Revolt and met with King Richard II – not a happy story for the peasants. 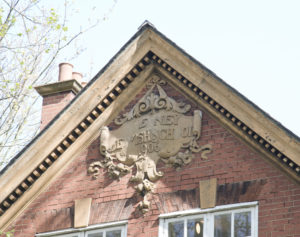 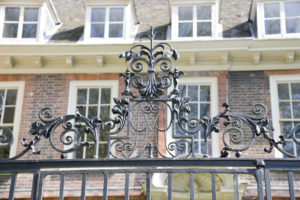 Hidden away next to the Crossrail building site were the ruins of College Chapel which were fenced off and I’m sure I wouldn’t have spotted it, if it hadn’t been pointed out to me. It was part of a college for Baptist ministers which was built in the early to mid 1800s. We walked through Stepney Green Park and saw a helicopter land on the Royal London Hospital helipad, on the roof – not something that ever happened while I worked there because the new towers are fairly recent. On the other side of the park we passed Stepney City Farm – a surprising green space in the inner city. It was well worth a visit to see its goats, donkeys, pigs and bees. 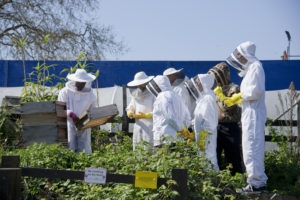 As we continued our tour, walking past St. Dunstan’s Church I hadn’t realised we were so close to where my father lived as a child, until I checked the map later to see where we’d been. It wouldn’t have been possible to see his house because it was demolished many years ago to make room for blocks of flats. But we saw many houses which are of a similar style to my grandmother’s house. 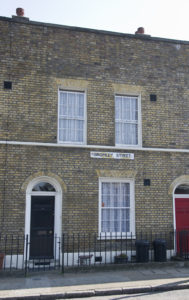 If you’d like to see all the photos I took on the day, they’re here in Flickr and as there was so much more to see, I shall definitely go back with my camera for another trip – or two.

Here’s one final photo of a sign that I noticed at the end of our walk in Stepney Green. I wonder how long ago the bakery disappeared. If you know, please get in touch. 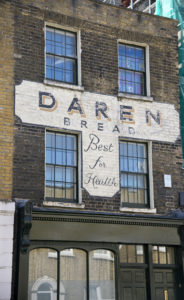