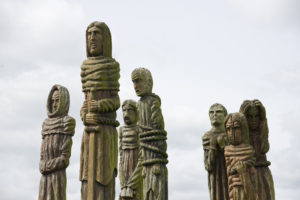 It seemed like a good idea to visit Wat Tyler Country Park, Pitsea, Essex following my jaunt round Stepney, London last week.
The link?
Well, apparently, Wat Tyler led the Peasants’ Revolt of 1381 and the men from Essex met King Richard II at Stepney Green to protest about the crippling taxes they were being forced to pay. Walter the tyler is remembered today in Essex in the country park, and as well as a plaque, there is an impressive set of 11-feet-high sculptures, carved by Robert Koenig, from sweet chestnut trees. 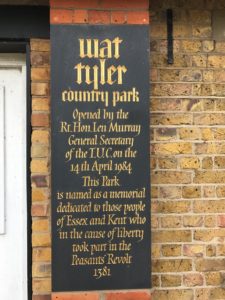 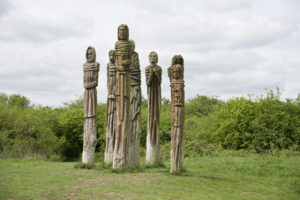 The front figure is Wat Tyler, leading six peasants and for more photographs of them, click here to go to Flickr
For more information about the Wat Tyler sculptures as well as the others in the park, you can find out here on the  Wat Tyler Country Park website

The other interesting thing about Wat Tyler Country Park is the Explosives Trail – a self-guided tour about the site of the Pitsea Explosives Factory which was operational during the First World War. I’ve researched this factory for my book THE GREAT WAR – 100 STORIES OF 100 WORDS HONOURING THOSE WHO LIVED AND DIED 100 YEARS AGO, as well as for one of my stories that has been published in the anthology ESSEX BELONGS TO US, which is called TO BE A MUNITIONETTE. But it was fascinating to actually visit the site. Unfortunately not much remains but there are information signs to explain where different buildings were located and what they were used for. However, the search huts can still be seen at the entrance to the site. Here, when workers arrived in the morning, they were searched for metal objects that could cause a spark – matches, coins, watches, jewellery. One single spark could ignite volatile fumes and blow up the factory, as had happened in a number of factories around Europe. The walkways round the site were wooden to prevent sparks being caused by stones striking against the ground. 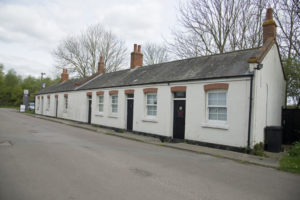 The laboratory building is also still there and is the place where the strength of incoming chemicals was tested to guarantee uniformity and safety, as consistent blends and strengths were vital for making reliable explosives that were safe to handle and use. In 1913 an explosion thought to be caused by sub-standard guncotton led to three deaths, extensive damage and a report to Parliament. Guncotton was made by mixing cotton waste with nitroglycerin, resulting in a powerful explosive. Testing was also carried out in the laboratory by igniting a small amount of an explosive on a bench top. 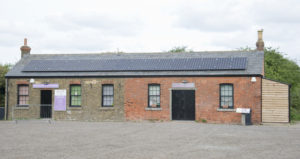 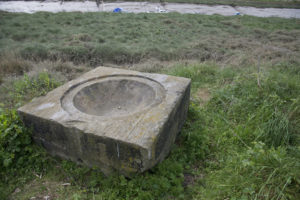 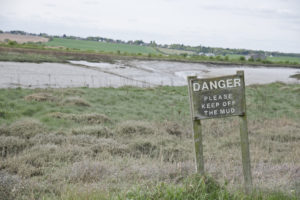 Down by the creek is a concrete bowl which was probably used to wash or drain guncotton. It would have been lined with bronze, to prevent sparks and reactions with any of the chemicals.

But there’s more than just history at the park – there’s plenty of wildlife too and several hides from which you can view Pitseahall Fleet to the east and across the muddy, tidal Timberman’s Creek to the west. I spotted this orange tip butterfly fluttering about amongst the hedgerows. 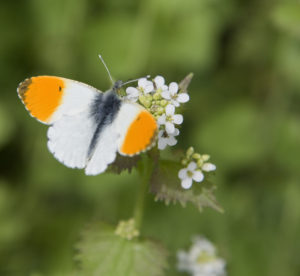 There’s a miniature railway, children’s play area and authentic 17th Century thatched cottage and a barn. If you’re in the area, Wat Tyler Country Park is well worth a visit.