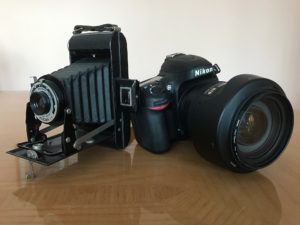 Are you happy to stride fearlessly into the unknown realms of the future or do you spend your time hankering for the past?

I’m definitely one of those who looks back to the past and who places great importance on memories. Ask my husband, on the other hand, anything about his primary school, and he has no recollection at all. Not that his time there was unhappy – on the contrary – but as far as he’s concerned, it’s all in the past, it’s done, it’s over. And then while I’m busy reminiscing, he’s planning what we’re going to do tomorrow, next week or next year! I suppose between us, we must get the balance about right.

I can see arguments for either tendency. Living in the past is all very well but some account needs to be taken of what’s going to happen tomorrow. On the other hand, someone who only thinks of what’s going to happen must be galloping through life and not be able to savour what’s already been experienced. I sometimes wonder if my interest in the past is why I like history so much and he isn’t so keen!

I’ve always thought the Roman god, Janus, has got it right. He’s the god of beginnings and changes, gates, passageways, doors, endings and time, and is easily recognisable because he has two faces, one looking forward to what’s before him and one looking back to where he’s been. January is thought to have been named after him although some say that there is now evidence that his month is June. But I like the idea that he is the god of January because that is the time that we think about moving into the new year as well as remembering the one that has just passed.  Interestingly, although many of the Roman gods had Greek equivalents, such as the goddess of love and beauty, who was Venus to the Romans and Aphrodite to the Greeks, Janus does not have a counterpart amongst the Greek gods. I wonder why? If you know, please tell!