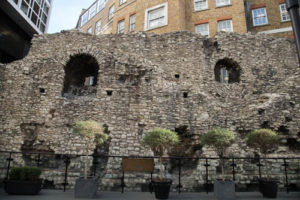 In Search of Roman London.

My cousin, Dave, and I love nothing better than to lose ourselves in London, wandering up cobbled streets and digging out all the history we can find. If we spot an ancient-looking alley way, we can’t resist diverting down there to see what treasures we can discover.

The other day, we found a great website Free Tours by Foot, and planned to visit as many Roman remains as we could. The itinerary was as follows:
The Museum of London,
The London Wall,
Amphitheatre – London Guildhall,
The Temple of Mithras – Temple Court,
The London Stone, Cannon Street
Roman Road – Southwark Cathedral.
We’d also seen an excellent video on YouTube –  Hidden Gems London Walking Tour in which we discovered that there were Roman ruins beneath All Hallows by the Tower Church which is close to the Tower of London. Since we planned to arrive in Fenchurch Street Station, we thought we’d check out everything on our list which was closest to the station first.

True to form, we’d hardly walked more than fifty yards when we diverted from the main road! We’d spotted an ancient wall and dived down the turning to explore. We were in Cooper’s Row, looking at the City Wall. It is an impressive 10.6m (35ft) tall wall, although only the bottom 4.4 m (14 1/2 ft) is Roman. During the Medieval period, the wall was heightened by 6.2m (21ft). The loopholes at the top would have been used by archers. 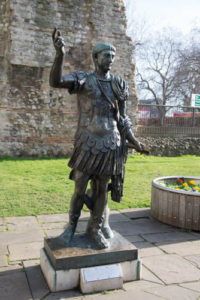 Next, we headed towards the Tower of London to another piece of ancient wall and the statue of Emperor Trajan.

At the Tower of London, it’s hard not to get distracted and Dave and I couldn’t resist walking round the perimeter where we found some lions made of chicken wire! 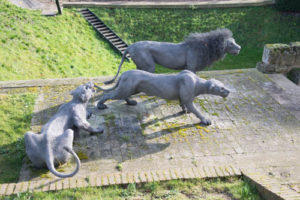 Lions made of chicken wire in the Tower of London

Next stop? All Hallows by the Tower Church. I’d passed it many times but had never ventured in. What a fantastic place! It was founded in 675AD and is the oldest church in the City. Had we not seen the video on YouTube, we might have missed the museum in the crypt which is situated in part of the original Saxon church. It contains a collection of Roman and Saxon artefacts, church plate and ancient registers dating back to the 16th century. Their entries record the baptism of William Penn, the founder of Pennsylvania who had been educated in the old schoolroom, and the marriage in 1797 of John Quincy-Adams, who became the sixth president of the USA. 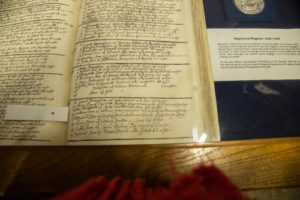 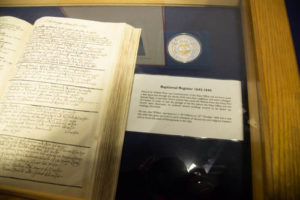 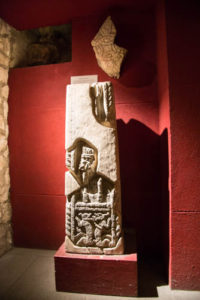 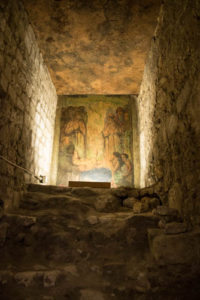 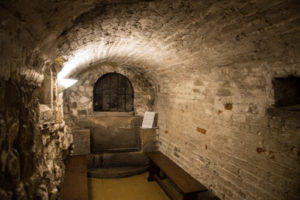 In 1666 the Great Fire of London started in Pudding Lane, a few hundred yards from the church. All Hallows survived through the efforts of Admiral Penn (William Penn’s father) who, along with his friend Samuel Pepys, watched London burn from the tower of the church.

But, what of the evidence of Roman habitation? Well, there is a model of Roman London, which showed the River Fleet (now beneath Fleet Street) and a smaller river, River Walbrook, (now beneath Walbrook) both flowing into the Thames. 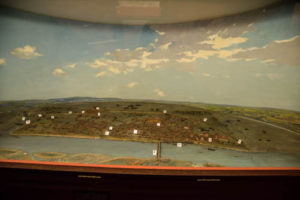 But the real Roman remains were at the far end of the crypt consisting of part of a pavement and also a floor of a Roman house. 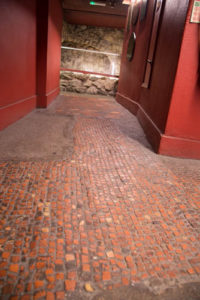 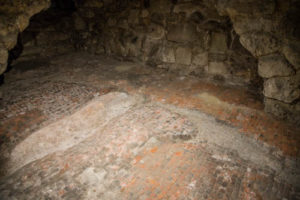 Floor of a Roman house

The other treasure we discovered was a tiny chapel with its Templar altar which originally came from Palestine. 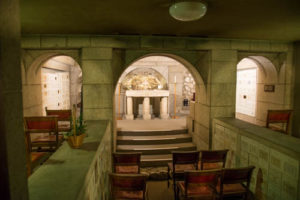 If you’re in the vicinity of All Hallows by the Tower Church, it’s well worth a visit. There are so many artefacts to be seen, and I’ve only mentioned a few here. Dave and I also discovered a link with something else other than Roman ruins which I’ll post about another time.

Well, back to our check list. Dave and I then set out to find the London Stone. Sadly, it appears that the building in which it is usually located is being renovated and the stone has been moved although it will return to its previous position in Cannon Street. I know I’ve walked past the stone many times and never noticed it so I was quite keen to see it – or as much of it as one could see through the grille. Apparently, no one knows its origin although the first reference to it is in the year 1100 and a possible explanation for it is that it was a Roman mile marker. Dave and I got completely sidetracked at this point and failed to find the Temple of Mithras although we did stumble across St. Stephen Walbrook Church, which was designed by Christopher Wren and now has a wonderful round altar by Henry Moore.

Then, we decided to cross London Bridge to Southwark Cathedral. Again, Dave and I got sidetracked (you’ve probably spotted this is a theme, with Dave and me!) and rather than finding the Roman road, we spent our time looking at the ruins of the 12th Century Winchester Palace and after a tour of the cathedral, we wandered through colourful Borough Market. 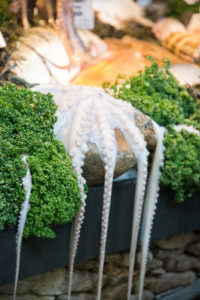 It was too late to set out for the Guildhall and the Museum of London, so we’ll reserve that pleasure for another day.

The next time I post, I’ll tell you about the unexpected theme which kept recurring throughout our jaunt to find Roman London. It links All Hallows by the Tower, a local vicar known as ‘Tubby’ Clayton, Southwark Cathedral and the First World War!