Isn’t it wonderful that there are people with the interest and skills necessary to keep our history alive? Recently, I went on a trip along the Thames from Southend on Sea Pier in Essex, to Tower Bridge in London, on the last sea-going paddle steamer in the world – PS Waverley. It was a pleasure to see the boat so – well – shipshape, and a joy to watch the engineers in the engine room.

Our trip started at Southend on Sea, on the pier. At just over a mile long, it is the longest pleasure pier in the world and we decided to walk the length of it, rather than wait for the train.

I was surprised to see the thinnest post box I’ve ever seen on the pier and apparently, if you post a card there, it will have a Southend Pier frank.

Once on board, we watched the engineers start the enormous engine and saw the gigantic paddles turning.

Despite the grey weather and odd shower, the water wasn’t choppy and it was interesting to see familiar places from such a unusual viewpoint.

When we arrived at Tower Bridge, the traffic was stopped and there was a bridge lift, allowing us to pass under the bridge. We turned around and half an hour later, there was another bridge lift for us to start our trip downriver, back to Southend.

The current PS Waverley was built in 1946 to replace the original that was built in 1899. She served in the Second World War as a minesweeper but was sunk in 1940 while evacuating troops from Dunkirk. 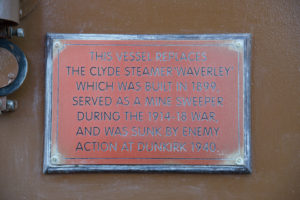 We arrived back at Southend Pier at about 6.00pm, just in time for the sun to set and the lights to come on in Southend.