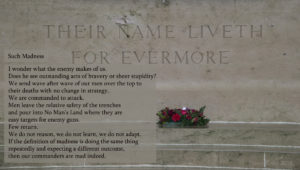 Such Madness – The thoughts of a Tommy?

Thinking Other People’s Thoughts
I often try to put myself in other people’s minds and imagine their thoughts.  It must be something to do with the fact that I’m always writing stories – either in my head or otherwise. Or perhaps I’m just nosy.

Of course, if I create a character, I can make him, her or it think in any way I please but I assume that no one will resonate with those thoughts if they are too unrealistic. Wondering how other people think was what started me writing the short stories in THE GREAT WAR – 100 STORIES OF 100 WORDS HONOURING THOSE WHO LIVED AND DIED 100 YEARS AGO. How might a World War One soldier in the trenches pass the last few seconds before the whistle blew and he had to summon the courage to go over the top? How might a mother feel about her son joining up? How might a Conscientious Objector feel about the prospect of being conscripted? How might a wife whose husband was on the Front, feel when she saw the postman at her door? Well, the truth is, I don’t know – I can only imagine. And I’ve done quite a lot of wondering.

In keeping with my use of only one hundred words to tell a story, here are some thoughts that might have passed through a Tommy’s mind during the Battle of the Somme which started for the Germans on 24th June 1916 – when the massive bombardment of their lines began, and for the British, on 01 July 1916 – when they started to go over the top. By 25 October, (the date I am posting this) the men at the Front, who survived, had endured 124 days of hell and would carry on suffering for another twenty-three – if they weren’t wounded or killed before.

I wonder what the enemy makes of us.
Does he see outstanding acts of bravery or sheer stupidity?
We send wave after wave of our men over the top to their deaths with no change in strategy.
We are commanded to attack.
Men leave the relative safety of the trenches and pour into No Man’s Land where they are easy targets for enemy guns.
Few return.
We do not reason, we do not learn, we do not adapt.
If the definition of madness is doing the same thing repeatedly and expecting a different outcome, then our commanders are mad indeed.

There are other such attempts at thinking how people may have thought during the First World War, in THE GREAT WAR – 100 STORIES OF 100 WORDS HONOURING THOSE WHO LIVED AND DIED 100 YEARS AGO  which is available at the following link here at Amazon, for either the paperback or the ebook. 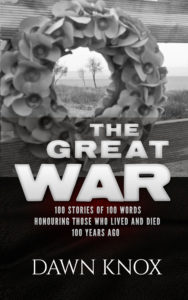