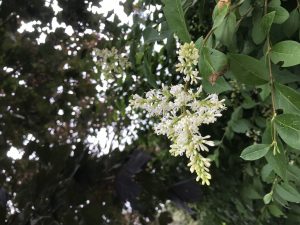 The smell of flowers on the privet hedges is strong at breaking up time!

The Evocative Smell of School

It’s that time of year again.

Yes, in England, the schools are about to – or may even have already – broken up for the summer holidays. I don’t have any school-age children in the family, so there’s no reason for me to remember, but I always know when it’s nearing the end of the summer term because I can smell it in the air! It’s the scent of privet flowers which admittedly isn’t quite as strong as it used to be when I walked to school years ago but nowadays, there are still many gardens which contain a privet hedge. When I was of school-age, many front gardens in my neighbourhood were bordered by privet hedges (Ligustrum ovalifolium) which for eleven months of the year were so dull to my young eyes, they were almost invisible, but in the middle of July, they flowered and the smell of the blooms was quite striking. So striking that even now, many years later, it evokes the feeling of excitement which accompanied the final few days of term when lessons were more relaxed and there were lots of interesting outings. And then of course there was the prospect of six blissful weeks of freedom.

As I walked home from a friend’s house the other day, I detected the scent of privet flowers and it prompted me to think about the other smells that I remember from school such as the strange aroma of the changing room – a mixture of dust, wood and old plimsols (do you remember plimsols?). And how about the dining hall? Hmm, well, that evokes cabbage and custard! I’m sure there were more pungent foods which were included in that heady mixture, and I think I simply remember the foods which I loathed most!

How about you? Do any smells remind you of school? And if you had a dining hall, which foods do you think contributed to that complex, pervasive aroma?