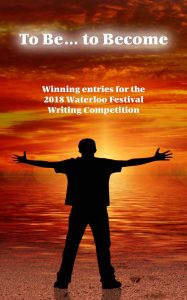 The Waterloo Festival 2018 is currently in full swing. This year, it has the theme ‘Transforming Minds’ and it aims to inspire and celebrate through innovative art and music.

The Waterloo Festival Writing Competition was judged by Gill James of Chapeltown Publishing who has compiled an ebook of the sixteen winning entries entitled ‘TO BE… TO BECOME’. Gill said “Some fantastic writing was offered and all of it was potentially publishable. We chose these because they told a good story, had a strong voice and were imaginative in their interpretation of the theme. Entrants were asked to produce a short story or a monologue. Style was diverse and each story is completely different from the others.”

Each of the authors was invited to read an excerpt from their story and ten of us were able to attend on the evening of the launch. We had been asked to wear a hat of our choice and warned that we would be reading from one of the podiums. I was quite intrigued to see the ‘podiums’ which were actually two pulpits on wheels, placed side by side! 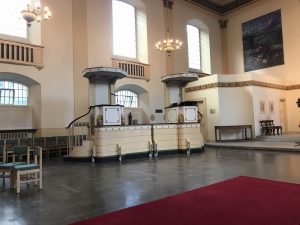 The readers alternated between pulpits to decrease the waiting time for the audience. My story is entitled ‘NEVER A COWARD’ and is set during World War One and as Gill said, she chose stories which varied widely in style and content – for example, a story told by a ghost, one about a refugee and another about students turning into rats! If you’d like to read ‘TO BE… TO BECOME’, it’s available on Amazon, here

Thanks to fellow winner, Paula Readman for taking the photo of me reading and here’s a photo I took of her. Check out those hats! 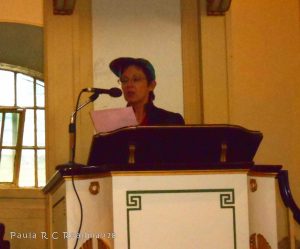 Me with my hat, reading ‘Never a Coward’ on the podium at the Waterloo Festival 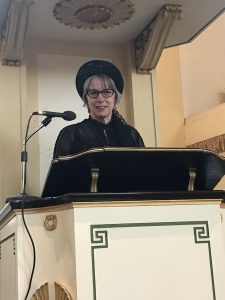