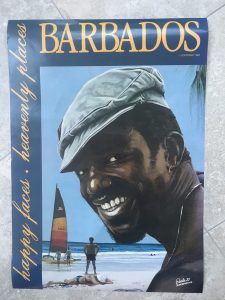 In 1989, I went on holiday to Barbados with Jamie and our eight-month old son. On our first day, Jamie walked into the sea and emerged several minutes later with two spines in the sole of his foot, having trodden on a sea urchin. We were wondering how much of a disaster this was when a man wandered by and asked if he could help. When we explained what had happened he said he could remove the spines for Jamie and took out a safety pin from his pocket and while he worked on Jamie’s foot, he told us that his name was David and chatted in a very friendly way. After he’d removed the spines, he recommended that we get some antiseptic cream to ensure it didn’t get infected. I can’t remember how we discovered that a friend of his had painted him for a promotional poster for Barbados but somehow, we acquired one of them and brought it home.

Last year, when we were having a major tidy up, we decided that since we’d never hung the poster on the wall, it was time to throw it out. But neither of us could quite do it and although it made it into the recycling bag, it was very quickly rescued and reinstated to the box of pictures which still have to be hung in our house. I can’t see it ever making it to any of the walls and I think it’s one of those things we’ll just hang on to – despite trying to be ruthless in our tidying up. But it is a lovely reminder of  a friendly man with a lovely smile who was kind enough to stop and help two tourists.

I don’t suppose David will ever see this but just in case, thank you for all your help.