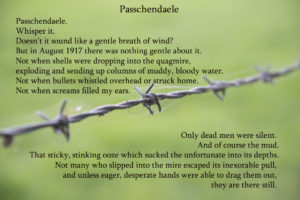 The weather wasn’t very summery where I live during August this year.

But it was much worse in 1917 in Belgium. Today is 04 September 2017 and I keep being reminded that one hundred years ago, the Battle of Passchendaele was raging near Ypres. In fact, the fighting took place between July and November 2017.

Here in one hundred words is my tribute to those people whose lives were touched by that dreadful time.

Doesn’t it sound like a gentle breath of wind?

But in August 1917 there was nothing gentle about it.

Not when shells were dropping into the quagmire, exploding and sending up columns of muddy, bloody water.

Not when bullets whistled overhead or struck home.

Not when screams filled my ears.

Only dead men were silent.

And of course the mud.

That sticky, stinking ooze which sucked the unfortunate into its depths.

Not many who slipped into the mire escaped its inexorable pull, and unless eager, desperate hands were able to drag them out, they are there still.